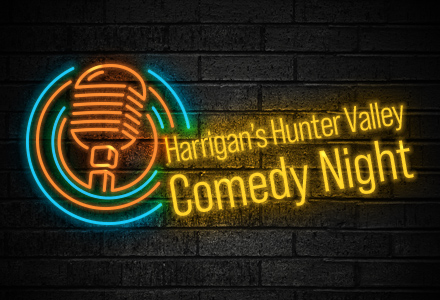 Enjoy a night full of laughter at Harrigan’s Hunter Valley.

He broke into comedy in Boston at the ripe age of 18 & after travelling around the world becoming a regular of the comedy scene in NY & L.A. Then he moved to Sydney, & has never looked back, bringing his trademark, relatable mirth to audiences around the country & the world.

He burst onto the Sydney comedy scene in formidable style & have won several comedy competitions. Not limited to the stage Sean performs in sketch comedy, is a freelance writer & author, having numerous satirical pieces published in Australian magazines & newspapers.

A comedy festival weapon he has lapped the country with huge theatre shows, comedy clubs & fringe festivals, corporate comedy & music festival performances such as Splendour in the Grass & Rotto Fest on Rottnest Island.

Pure chemistry… A great raconteur; relaxed and in control knows how to relate to the audience – The Melbourne Age

Receive X% off your first booking.

Signing up also allows us to deliver relevant content to you.